甘え: Amae
What is amae?

Amae is a Japanese term used to describe behavior and emotion that is often translated as “indulgence” and is related to acting as a spoiled child. The concept of amae received international attention after a publication by a Japanese psychoanalyst, Takeo Doi in 1971. There is perhaps no equivalent term in the English language; however, amae situations may exist in countries outside of Japan with or without a label (Niiya et al., 2006). The reception of amae actions varies based on the context of usage.

One of the leading researchers of the concept of amae in indigenous social psychology is Professor Susumu Yamaguchi. He proposed that amae can be defined as the “presumed acceptance of one’s inappropriate behavior or request” (Yamaguchi & Ariizumi, 2006, p. 164). In other words, making a request and expecting it to be accepted (presumed acceptance) even though the request may be inappropriate. To clarify the inappropriateness of a request, Yamaguchi (2004) gives the example of a 10-year-old boy who asks to be dressed by his mother. A characteristic of amae is that it may cause a temporary suspension of social restraints, in which inappropriate behavior by the interactants are allowed.

Control, dependence, and the universality of amae

According to Yamaguchi (2004, p. 30), “In amae, individuals attempt to control their environment using someone who is more powerful in the situation than themselves.” An amae actor is in control of a situation if the amae request is accepted by the counterpart, who becomes obligated to fulfil the request and therefore under the control of the amae actor. Amae is different from dependence because a successful amae actor is in control of their environment in addition to having someone more powerful in the situation under their control. A dependent person relinquishes his control of his environment and seeks dependence.

In an experiment in the United States, Niiya et al. (2006) compared reactions to different scenarios of amae, conducted with students from both Japan and the US. These experiments showed that amae can make positive impressions on the receiver; that is, they feel happy for being asked a favor (someone depending on them). However, if the actor is too manipulative, it often brings negative emotions to the receiver, as explained by Kim & Yamaguchi (1995). Niiya et al. (2006) produced data through an experiment using vignettes in the United States, which suggested that “feelings of positive amae exists in American culture despite the absence of a verbal label” (p. 290). Indeed, “multicultural amae” may or may not have equivalent expressions in languages outside Japan.

Amae can serve the following purposes:

1) To satisfy a desire or help to achieve a certain goal.
In the first case, which is perhaps the most basic one, the amae initiator will ask someone else who is more capable or powerful to do him a favor when he is not able to accomplish something by himself. The amae is completed when desires are satisfied or goals are achieved.

2) To “test love” or seek affection.
The second case is usually found in close relationships. In such cases, the initiator will ask for a favor just as in the previous case, but his ultimate goal is not to have the favor done but to see to what extent the counterpart is willing to accept his request or inappropriate behaviors. In some cases, the initiator may even cancel the favor after his counterpart agrees to help, because the assurance that he is accepted and loved is simply enough.

3) To strengthen closeness in a broader social context.
In the third case, psychologically independent and autonomous people intentionally initiate and accept amae to maintain harmonious interpersonal relationships. Because the counterpart can feel valued by the amae requester, inappropriate behavior or an inappropriate request within limits can be useful in facilitating a close relationship.

Because the usage of amae has various patterns depending on contexts, it is necessary to  characterize how to use amae giving some examples in order to understand the usage.  Amae is categorized into two classes: one is amae in the interactive relationship (interactive amae), and the other is amae judged by an objective third person (objective amae). 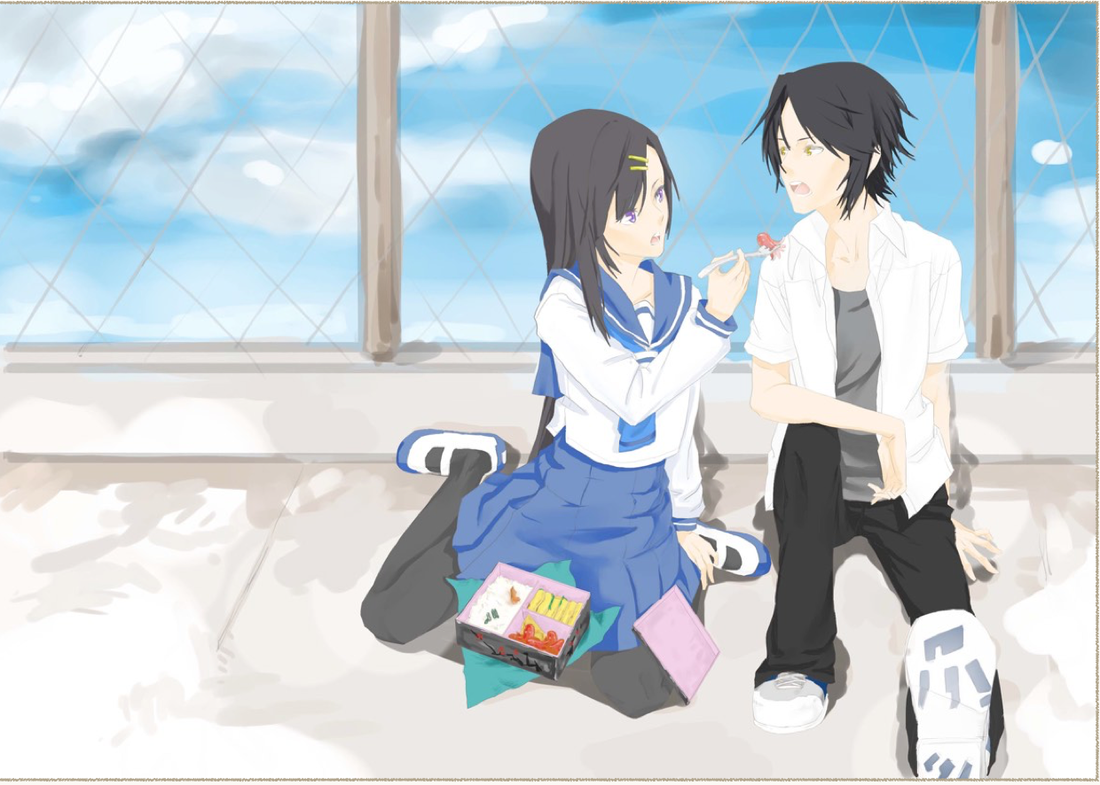 2) Romantic relationships
Amae is also common in the behavior of romantic couples. Imagine a couple feeding each other saying “open your mouth wide,” which is age-inappropriate. This resembles that of the child-parent-relationship. In another situation, a girl asks her boyfriends to go out in the pouring rain to buy her something unnecessary. She is just testing how deeply her boyfriend loves her and if he accepts such unreasonable request, she can be sure of his affection and feel satisfied--he doesn’t really have to go.
Self-indulged Amae
The researcher cited above mainly focused on amae in interactive relationships. In interactive amae, an amae actor asks a request, which is inappropriate, and an amae receiver accepts it. However, according to Behrens (2004), we sometimes do amae to ourselves. In this category, an amae actor and an amae receiver is the same person. He may be unaware of his inappropriate behavior at first, and the amae act is realized through self-reflection or through indication by a third party. For example, when a freshman in a strict (competitive) sports club team does not do additional practice or running besides the team activity, a senior grade student might say to him “Your way of thinking is amae. We need to work much harder to win.” (In this example, the freshman might not think his attitude towards the club activity is a problem. However, he is performing “inappropriate” behavior for the club and allows/receives his own “laziness”.) Like this, amae act and reception are occurring within one person.
To be sure, people are sometimes known to treat themselves as interactants (Fridlund, 1994). In one study, Behrens (2004) found that nearly half of the interviewees in Japan first discussed the way they would do amae to themselves, describing behaviors of “not taking good care of myself,” “trying to carry over the project to the next day when it could be done in a few more hours,” “trying to run away from my own research,” and so forth. Lebra (1976) referred to this amae as self-indulgence to imply “disapproval for not taking responsibility seriously”(p. 55).

​Related expressions
Besides the noun amae, we have to consider its adjective form amai. Its general meaning is sweet when used for the taste of food. When used for the attitude or idea of someone, however, its meaning is “immature” or “spoiling”. For example, if a student is always late for the class but a teacher of the class doesn’t scold her, we can say that the teacher is amai (spoiling the student).

Conclusion
Amae has different functions and usages, depending on contexts. In addition to Doi’s understanding of the concept, amae can be used not only to be “passively” loved, but also more proactively to accomplish a certain goal, test love, or strengthen closeness. Though the phenomenon of amae may not be culturally unique to Japan, considering the variety of the meanings of amae, it has the potential to be a key concept for understanding the social psychology of the Japanese.

1. How is amae expressed in your language and how might amae be different in your country?

2. In some countries, it is regarded as inappropriate for children to sleep with their parents after they have reached a certain relatively young age. What do you think about this behavior in terms of  amae?

Behrens, K. Y. (2004). A multifaceted view of the concept of amae: Reconsidering the indigenous Japanese concept of
​relatedness. Human Development, 47(1), 1-27.

Kim, U., & Yamaguchi, S. (1995). Conceptual and empirical analysis of amae: Exploration into Japanese psycho-social space.   In Proceedings of the 43rd Annual Conference of the Japanese Group Dynamics Association (pp. 158-159).

Yamaguchi, S. (2004). Further clarifications of the concept of amae in relation to dependence and attachment. Human Development, 47(1), 28-33.